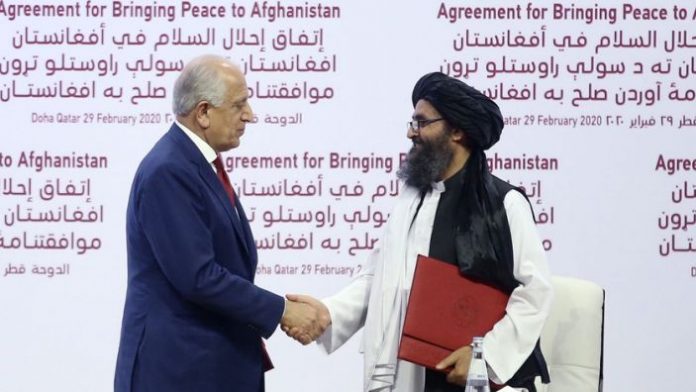 KABUL: The Taliban on Tuesday reaffirmed their commitment to the landmark deal signed between them and the United States in February in a video call with Secretary of State Mike Pompeo.
The discussion came as US President Donald Trump faces mounting pressure to explain why he did nothing after being reportedly told that Russian spies had offered and paid cash to Taliban-linked militants for killing American soldiers.
The Taliban have denied that their fighters received any Russian bounties, and the group’s Qatar-based chief negotiator Mullah Abdul Ghani Baradar reiterated their pledge not to strike against the US.
Baradar told Pompeo that “according to the agreement, we do not allow anyone to use Afghan soil against the US and other countries”, Taliban spokesman Suhail Shaheen said Monday in a statement on Twitter.
The New York Times, citing anonymous officials, had reported last week that Trump had been told about the alleged Russian bounties but he did nothing in response.
Trump denied being informed of the assessment while the White House said the claim had been kept from him because the intelligence underpinning it was unverified.
But another report from the Times on Monday said the president had received a report about the alleged Russian bounties as early as February.
That month, the United States had pledged to withdraw all its troops from Afghanistan by mid-2021 in return for security guarantees in a bid to pave the way for negotiations between warring sides.
Under the landmark agreement, which excluded the Afghan government, Washington and the militants said they would refrain from attacking each other.
The Taliban spokesman said Baradar and Pompeo discussed concerns about the deal, including intra-Afghan talks and the release of 5,000 imprisoned insurgents.
“We are committed to starting intra-Afghan talks,” Baradar told Pompeo, blaming the hold-up on the delayed release of prisoners, according to Shaheen.
The Afghan government in Kabul has said it has freed nearly 4,000 Taliban prisoners so far in a bid to kickstart the negotiations.
Pompeo acknowledged the Taliban had refrained from attacking urban centres and military bases under the deal, but called on them to do more to reduce overall violence, according to Shaheen.
Violence had dropped across much of the country after the Taliban offered a brief ceasefire to mark Eid-ul-Fitr festival last month, but officials say the insurgents have stepped up attacks in recent weeks.
Most attacks by the Taliban have targeted Afghan security forces, although there are regular police reports that civilians have been killed in roadside bomb blasts.