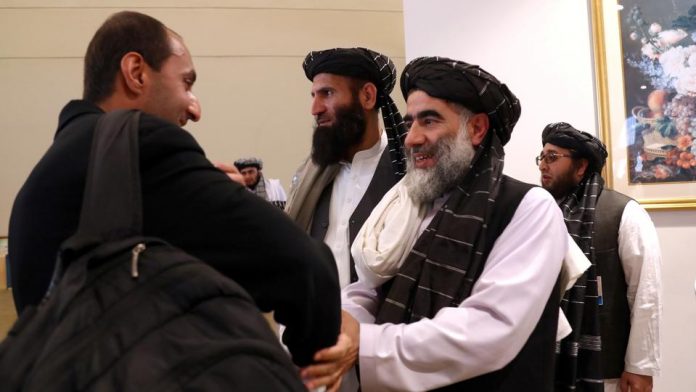 KABUL: A three-member Taliban team arrived in Kabul on Tuesday to begin a prisoner exchange process pivotal to starting talks between the insurgents and the government side to end Afghanistan’s 18-year-old war.
The peace talks, known as the intra-Afghan dialogue, were envisaged in an agreement between the United States and the Taliban signed in Doha, which also stipulated an exchange of 6,000 prisoners held by the Afghan government and the Taliban.
“Our three-member technical team will help the process of prisoners’ release by identification of the prisoners, (and) their transportation,” Taliban spokesman Zabihullah Mujahid told Reuters.
The prisoner release had been a sticking point, with the Taliban and the Afghan government differing over the process and timing of the exchange.
However, after weeks of back and forth, the process is set to begin with the arrival of the Taliban team, which will set up camp at a luxury hotel in Kabul.
“They are here now and we will begin our discussion; the prisoner release might go ahead in a few days if everything goes as planned,” a senior Afghan government official told Reuters.
Mujahid said the Taliban team expected practical work to start in the next few days on a deal with the US-backed government, to which the Taliban had previously refused to speak directly.
The Taliban had planned to send a delegation of 10, Mujahid said, but it was reduced because of Afghanistan’s coronavirus outbreak.
The talks also received a boost when the negotiating team appointed by the government was endorsed by Abdullah Abdullah, Afghan President Ashraf Ghani’s main political rival.
“The formation of an inclusive negotiation team is an important step toward facilitating intra-Afghan negotiations,” Abdullah said on Twitter.
Differences between Ghani and Abdullah over the result of the 2019 presidential election have threatened to derail the peace process, raising concerns in Washington.
US Secretary of State Mike Pompeo termed Tuesday’s developments “good news”.
Pompeo last week flew to Kabul and the Qatari capital Doha, where the Taliban have an office, to urge all sides to move forward with the process, which at that point was deadlocked.
“We’ve seen a (negotiating) team identified. Looks like it’s pretty inclusive, pretty broad. We’re happy about that,” Pompeo told a news conference in Washington.
“We’ve begun to see some work done on prisoner releases as well – all elements that have to come together so we can get to the inter-Afghan negotiations, which ultimately will prove to be the only mechanism that has any hope of delivering peace and reconciliation to the people,” he said. …Agencies