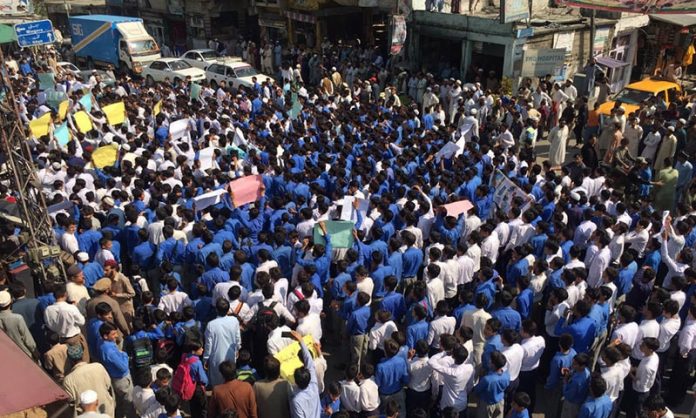 PESHAWAR: Scores of students, teachers and members of the civil society on Monday protested the murder of district education officer Nawab Ali in Kolai-Palas district of Kohistan.
On the call of the Shangla teachers association, protests and rallies were held across Khyber Pakhtunkhwa including in Shangla, Nawab’s native district.
On Saturday, Nawab was allegedly murdered in his office. Pallas Station House Officer (SHO) Muhammad Hafeez told Dawn that a first information report (FIR) was registered against unknown suspects under Section 302 (premeditated murder) of the Pakistan Penal Code.
Additionally, a Joint Investigation Team (JIT), led by Mansehra sub-divisional police officer (SDPO) Ashiq Hussain, has also been formed to investigate the case on the request of the slain education officer’s family.
Protesters in Bisham today blocked the main artery of Karakoram Highway for two hours as they chanted slogans against MPA Mufti Ubaidur Rehman, police and district commissioner of Kolai-Palas Kohistan, accusing them of being involved in the murder case.
Addressing the protesting students and teachers, speakers demanded the government to arrest the culprits as well as police heads, Rehman and the DC for their alleged involvement in Nawab’s death.
Protests were also held in Pattan in Lower Kohistan, Shangla, Puran, Chakesar, Shahapur, Martung, Karora, Dehrai, Alpuri, Dandai and other areas.
Demonstrations were staged in schools and colleges across the province. In government and private schools, students and teachers offered prayers for the DEO and the national flag was flown at half-mast in all government schools.
Meanwhile, Adviser to Chief Minister on Elementary and Secondary Education Ziaullah Bangash today visited Chakesar and expressed his condolences with Nawab’s family.
He assured the family that he was in contact with the JIT, and that the chief minister had issued strict orders to arrest the suspects within 48 hours.
Additionally, the deputy inspector general of police was also directed to take a personal interest in the case and to arrest the suspects as soon as possible.