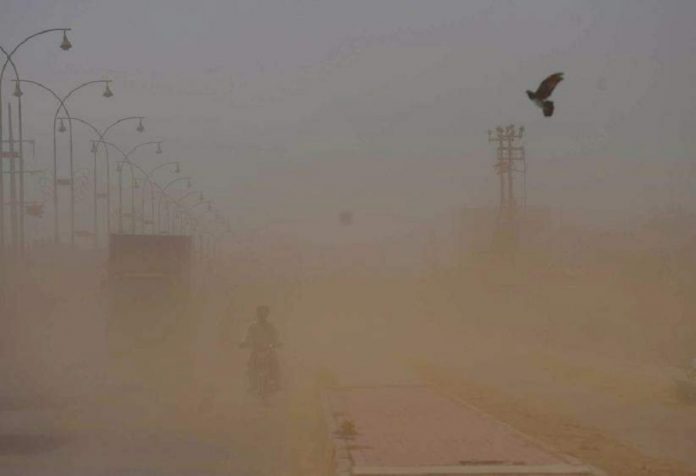 KARACHI: A dust storm accompanied by strong winds swept across Karachi on Sunday night, causing multiple casualties.
While Pakistan Meteorological Department has forecast rains along with dust and thunderstorm in the city for Monday (today), at least three people died and 10 others have reportedly been severely injured owing to bad weather conditions in the city.
A man was killed as a tree fell on him near Peoples Chowrangi.
In another incident, a school roof situated at Tipu Sultan road collapsed injuring five students who were rushed to a nearby hospital.
Meanwhile, the imam of a mosque at fish harbour was injured as the mosque’s makeshift roof collapsed.
Moreover, two people were injured in Landhi No 3 as a part of a wall in their house collapsed.
In Surjani Town No 7, two people were injured as the roof of their house collapsed.
The storm, caused by a low-pressure system, dropped the temperatures, providing citizens with some respite from the scorching heat. The flights were also delayed as a dust storm reduced visibility.
There were also reports of injuries and damage in some areas as rescue teams responded to remove some downed trees and poles, clearing roads.
It hit several parts of the port city, including Gulshan-e-Iqbal, SITE, Malir, Landi, Stadium Road, Gulistan-e-Jauhar, North Karachi and North Nazimabad.
The weather system is likely to intensify and grip most parts of the province. While Pakistan Meteorological Department has forecast rains along with dust and thunderstorm in Karachi on Monday and Tuesday. The rain is expected to provide slight relief from the scorching heat.
The official said there was a likelihood of rains falling in Balochistan from Monday to Tuesday and at scattered places in Sindh’s Sukkur, Larkana, Shaheed Benazirbad, Hyderabad and Karachi divisions on Monday and Tuesday.
He warned that heavy rains could generate flash floods in nullah and riverine of Makran, Quetta, Zhob and D.G Khan divisions on Monday and Tuesday, while they could trigger landslides in Malakand and Hazara divisions, Gilgit-Baltistan and Azad Jammu and Kashmir on Tuesday and Wednesday. 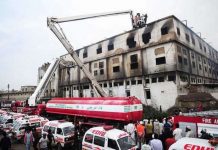