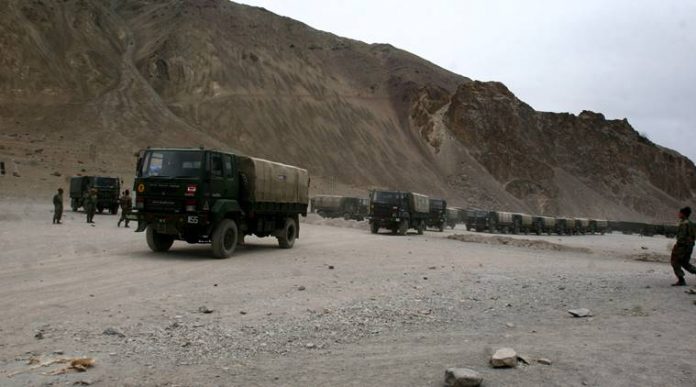 NEW DELHI: Three Indian soldiers have been killed in a clash on the Chinese border, the Indian army said Tuesday, following weeks of rising tensions and the deployment of thousands of extra troops from both sides.
“A violent face-off took place yesterday (Monday) night with casualties. The loss of lives on the Indian side includes an officer and two soldiers,” an Indian army spokesman said in a statement.
Meanwhile, China has accused India of crossing a disputed border between the two countries.
Foreign ministry spokesman Zhao Lijian said Indian troops crossed the borderline twice on Monday, “provoking and attacking Chinese personnel, resulting in a serious physical confrontation between border forces on the two sides”.
“Senior military officials of the two sides are currently meeting at the venue to defuse the situation.”
An Indian army officer based in the region told AFP that there had been no shooting and that the officer killed had been a colonel.
“There was no firing. No firearms were used. It was violent hand-to-hand scuffles,” the officer said on condition of anonymity.
On May 9, several Indian and Chinese soldiers were injured in a clash involving fists and stone-throwing.
The Chinese foreign ministry said only last week that a “positive consensus” on resolving the latest border issue was achieved following “effective communication” through diplomatic and military channels.
In a later statement, India’s foreign ministry had said the two sides would “continue the military and diplomatic engagements to resolve the situation and to ensure peace and tranquillity in the border areas.”
But sources and Indian news reports suggested that India appeared to have effectively ceded to China areas that the People’s Liberation Army occupied in recent weeks, notably parts of the northern side of the Pangong Tso lake and some of the strategically important Galwan river valley.
India’s Prime Minister Narendra Modi and Chinese leader Xi Jinping have sought to ease tensions at summits over the past two years when they agreed to boost border communications between their militaries.