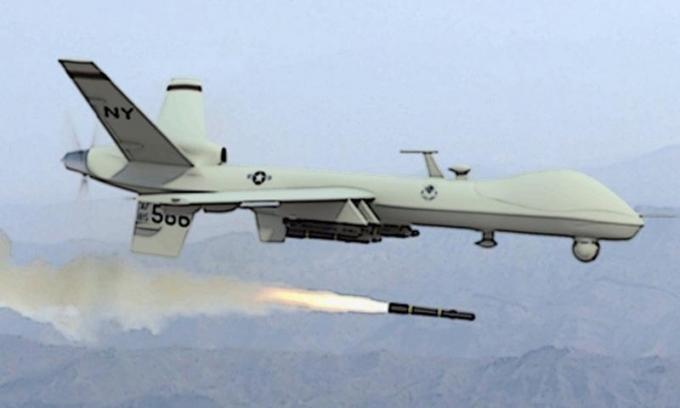 KABUL: At least three suspected militants, belonging to the self-styled Islamic State militant group, were killed and on Thursday in a US drone strikes in Nazyan district of Afghanistan’s Nangarhar province, near Pakistan’s Khyber Agency.
Security sources said the the drone targeted a militant compound in the Nazyan district , killing three suspected militants and injuring five others. The sources added that the compound was completely destroyed in the strike.
In a similar airstrike in the same area on October 23, at least 16 suspected militants belong to IS were reported killed.
There have been fears of the Middle Eastern group, also known by its Arabic acronym Daesh, making inroads in Afghanistan since US-led Nato forces ended their combat mission after fighting local militants Taliban for 13 years but the issue made headlines when in June, Afghan Taliban wrote a letter to IS chief Abu Bakr al-Baghdadi warning him against waging a parallel insurgency in the country.
The Taliban insisted that “jihad (holy war) against the Americans and their allies must be conducted under one flag and one leadership”.
The letter was published on the Taliban website in Pashto, Urdu, Arabic and Dari.
A United Nations (UN) report issued in September, however claimed IS has won over a large number of sympathisers and recruiting followers in 25 of the country’s 34 provinces.
Till 2014, Nazyan district had been serving as a safe haven for the Mullah Fazllullah led Tehreek-i-Taliban Pakistan (TTP).
According to Pakistani security officials, militants based in the Nazyan district had planned the devastating attack on the Army Public School in Peshawar, which left over 140 children and teachers dead and scores injured.