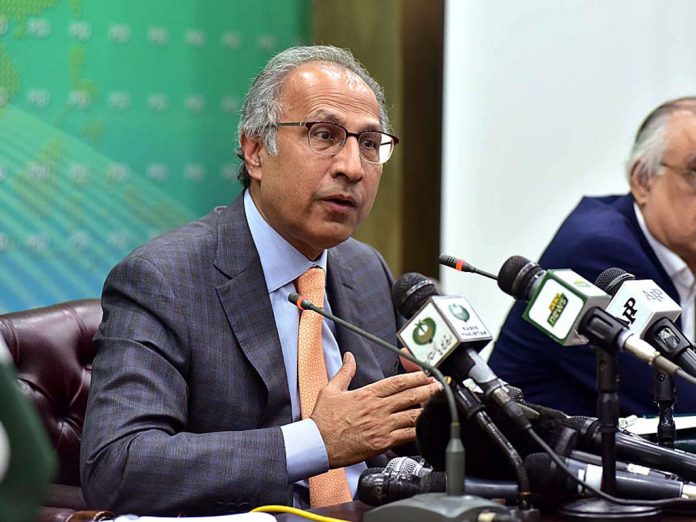 ISLAMABAD: Talks between the government and traders’ bodies on Wednesday afternoon achieved breakthrough as the government has agreed to delay any action for three months on the earlier condition that presentation of a CNIC copy for buying and selling of goods up to Rs50,000 is mandatory.
Both sides have further agreed that traders with annual sales of up to Rs100 million will be excluded from the list of the withholding agents.
Furthermore, only those businessmen and traders with electricity bill equal to or more than Rs1.2 million annually will be required to get included with the sales tax registration.
Moreover, for the annual sales of up to Rs100 million, now shopkeepers will be required to pay only 0.5% of turnover tax. Business representatives committees will be formed to solve the problems.
It has also been decided to provide new registration and tax return forms in the Urdu language.
Earlier, the FBR proposed that the small shopkeeper will pay only 2% of turnover as tax or a fixed tax of Rs20,000 to Rs40,000 whichever is higher. Against 2% tax, the traders had demanded only 0.1% turnover tax and to set the turnover limit at Rs100 million per annum for a small shopkeeper.
Through the 2019-20 budget, the government made it legally binding for the industrialists to seek the CNICs from the wholesalers and distributors on the sales of over Rs50,000. The move pitched the traders and small shopkeepers against the government.
All major groups of traders had sought to bring trade and economic activities across the country to a standstill for building pressure on the government to change its certain policies.
Traders had warned expanding the protest if the conditions, including presenting a CNIC copy for buying and selling goods up to Rs50,000 is not withdrawn.
Yesterday, the representatives of traders’ organizations, while holding a press conference in Islamabad, claimed that the Federal Bureau of Revenue (FBR) contained no viable formula and the bureau was unwilling to introduce an adequate and business-friendly method of taxation.
Contrarily, following the talks, Mr Sheikh said the policies of the FBR were being improved and claimed that about 3 to 3.5 million traders were not included in the tax net.
“The government wants to collect taxes from whosoever is earning,” he said, adding that traders’ representatives have ensured to sit down with the IMF for talks to assist the government in evading the current impasse.
All traders of Karachi under various associations had been asked to keep shutters down on both days to protest against additional duties and taxes on imports, sales tax registration, turnover tax, fixed tax etc.
Traders’ associations in Karachi, Lahore, Quetta and other parts of the country in support of the strike call given by All-Pakistan Anjuman-i-Tajiran (APAT) and the Pakistan Traders Alliance (PTA) had also planned for marching towards Islamabad in protest.
Besides, all markets in Lahore, Islamabad, Rawalpindi, Quetta, Gujrat, Liaquatpur, Peshawar, Swabi and many other urban cities observed shutdown strike.
In Karachi, several markets and bazaars had been called by the Electronic Dealers’ Association and All Sarafa Jewelers’ Association to observe strike, a day before when the anti-government protest march by opposition parties would reach the federal capital.
The traders demanded the government and the FBR to bring “business-friendly” policies as consumers have gradually squeezed their purchases due to sky-rocketing prices of essential commodities.
Earlier, negotiating with the delegation of the Textile Exporters, Sheikh has accepted the demand of textile exporters, allowing them payment of Sales Tax (ST) refund, for the month of August and July, through old Expeditious Refund System (ERS) system.
The advisor said that instead of filing claim Form-H for ST refunds, the exporters would be facilitated to claim their refunds through the old ERS system.
Advisor to the PM on Textile and Commerce Industry Abdul Razak Dawood, FBR Chairman Syed Shabbar Zaidi, Textile Task Force chief Ahsan Bashir, finance secretary Naveed Kamran Baloch and special finance secretary Umar Hameed Khan were also present in the meeting.
It has been agreed to improve form-H or bring about a parallel refund system within two weeks to ensure timely payment of sales tax refunds.
On the demand of the delegation, Shaikh directed the FBR to immediately pay the exporters Rs2 billion payable ST refunds for which Refund Payment Orders (RPOs) have already been issued.
He said that the government believed in promoting exports instead of blocking sales tax refunds, adding that all possible measures would be taken to facilitate exporters and resolve their grievances regarding ST refunds.