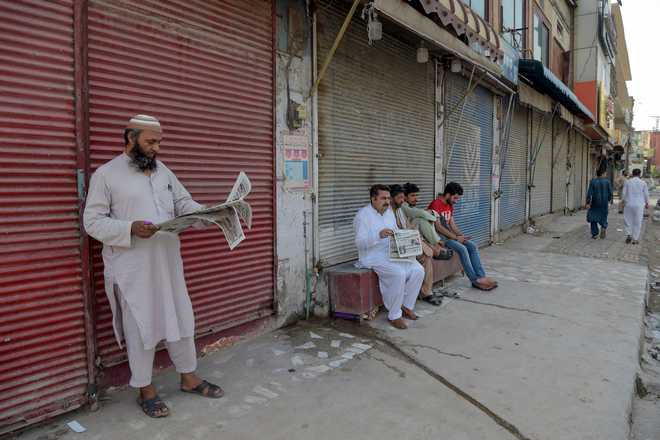 ISLAMABAD: A massive two-day nationwide shutter-down strike is being observed on Oct 29 and 30 across the country on the call of traders’ bodies against the federal government over its “unfair, ineffective and anti-traders economic policies.”
All major groups of traders have sought to bring trade and economic activities across the country to a standstill for building pressure on the government to change its policies and abolish the CNIC condition on transaction of Rs50,000 or above on locally produced items.
Traders have warned expanding the protest if the conditions, including presenting a CNIC copy for buying and selling goods up to Rs50,000 is not withdrawn.
All traders of Karachi under various associations have been asked to keep shutters down on both days to protest against additional duties and taxes on imports, sales tax registration, turnover tax, fixed tax etc.
Major traders in Faisalabad have also called for strike in protest against the Federal Bureau of Revenue (FBR).
Traders’ associations in Karachi, Lahore, Quetta and other parts of the country in support of the strike call given by All-Pakistan Anjuman-i-Tajiran (APAT) and the Pakistan Traders Alliance (PTA) have also planned for marching towards Islamabad in protest.
Besides, all markets in Lahore, Islamabad, Rawalpindi, Quetta, Gujrat, Liaquatpur, Peshawar, Swabi and many other urban cities are observing shutdown strike in protest against the government.
In Karachi, several markets and bazaars have been called by the Electronic Dealers’ Association and All Sarafa Jewelers’ Association to observe strike for two days, the day when the anti-government protest march by opposition parties would reach the federal capital.
The traders have demanded the government and the FBR to bring “business-friendly” policies as consumers have gradually squeezed their purchases due to sky-rocketing prices of essential commodities.