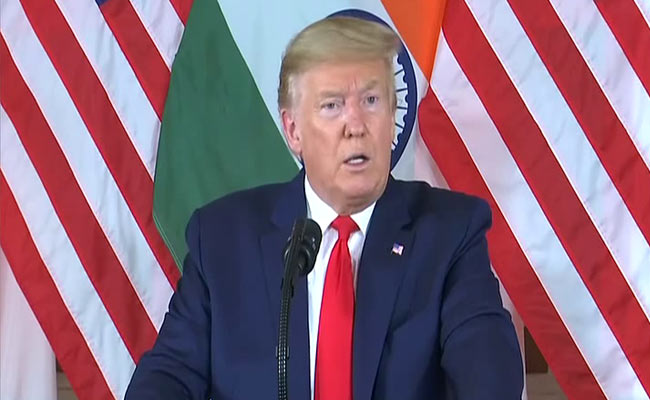 NEW DELHI: US President Donald Trump on Tuesday again offers to mediate between nuclear-arch rivals India and Pakistan on the Kashmir issue.
Addressing a press conference in New Delhi on Tuesday, he said that he offered Indian Prime Minister Narendra Modi to mediate between India and Pakistan.
The US president said, “I have good equation with Prime Minister Imran Khan and I will do whatever I can do to help because my relationship with both gentlemen (PM Modi & PM Imran) is so good.”
Regarding Taliban peace deal, Trump said, “We are working on a peace deal with the Taliban and everyone is happy even people who are against me 99.9% of the time. People are really happy to see a peace deal being struck. Other administrations have been trying to do something.”
He said that the US is engaged in talks with the Taliban with a view to end 18-year war in Afghanistan that has been a major strain on the US militarily and politically, adding that he thinks India will “like to see it happen” (the peace deal).”
Trump said that he had raised the issue of religious freedom with Modi in their private talks. But he described the prime minister s answer as “incredible,” leaving doubt he raised forceful objections.
On Monday, the US President received a red-carpet welcome in the world’s biggest democracy Monday, addressing a huge rally at a mega cricket stadium on a maiden official visit to India that is big on photo opportunities but likely short on substance.
Trade tensions have grown between the US and India, the world’s fifth-biggest economy, as Trump’s “America First” drive collides with Prime Minister Narendra Modi’s protectionist “Make in India” mantra.
While sharing concerns about China and deepening their defence ties, India has bristled at Trump’s offer to mediate in the Kashmir dispute with Pakistan, and at unease in Washington over a citizenship law criticised as anti-Muslim.
Visiting Modi’s home state of Gujarat, Trump and First Lady Melania visited independence hero Mahatma Gandhi’s ashram, where Modi gifted him a “see no evil, hear no evil, speak no evil” three wise monkeys statue.
The billionaire and the tea seller’s son then headed to a new cricket stadium — the biggest in the world — where Trump addressed a crowd of around 100,000.
“Relationship with Pakistan is a very good one. Thanks to these efforts, we are beginning to see signs of big progress with Pakistan and we are hopeful for reduced tensions, greater stability and the future of harmony for all of the nations of South Asia,” Donald Trump said.
Excited spectators had queued from 4:00 am for the “Namaste Trump” rally, reciprocating a “Howdy Modi” event in Houston last year. Workers rushed to finish the stadium and a wall that locals said was to hide a slum. Stray dogs, cows and monkeys were also kept away.
Later Monday Trump and Melania — dressed in an off-white jump suit and Indian sash alongside her husband in his usual suit and tie — flew to the Taj Mahal for sunset before the main official talks on Tuesday.
Parts of the white marble “jewel of Muslim art”, according to UNESCO, were given a mud-pack facial to remove stains, while efforts were made to lessen the stench of the adjacent river.