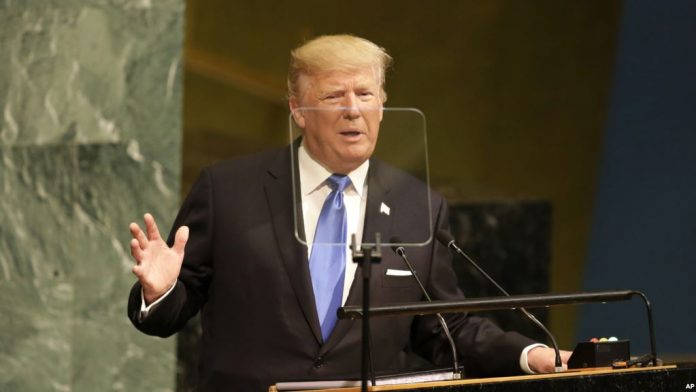 UNITED NATIONS: President Donald Trump warned leaders gathered at the United Nations (UN) General Assembly on Tuesday that the United States may have to destroy North Korea if Kim Jong-Un s nuclear-armed regime threatens its neighbors.
“The United States has great strength and patience, but if it is forced to defend itself or its allies, we will have no choice but to totally destroy North Korea.
“Rocket Man is on a suicide mission for himself and for his regime,” he said, using his new nickname for the North Korean leader. “The United States is ready, willing and able, but hopefully this will not be necessary.”
Also, he denounced the Iran nuclear deal as an “embarrassment” on Tuesday, in the latest sign that he plans to tear up or renegotiate the landmark accord.
“Frankly, that deal is an embarrassment to the United States, and I don t think you ve heard the last of it,” Trump told the UN General Assembly.
“Believe me. It is time for the entire world to join us in demanding that Iran s government end its pursuit of death and destruction.”
He decried threats to sovereignty in Ukraine and the South China Sea.
In his maiden speech to the UN General Assembly, Trump did not explicitly mention Russia or China, but the comment was clearly aimed at Moscow and Beijing.
“We must reject threats to sovereignty from the Ukraine to the South China Sea,” Trump said. “We must uphold respect for law, respect for borders, and respect for culture, and the peaceful engagement these allow.”
Addressing to the session, he laid out his vision of a world order based on strong “sovereign nations” rather than multilateral alliances. “As long as I hold this office, I will defend America s interests above all else, but in fulfilling our obligations to our nations, we also realize that it s in everyone s interests to seek the future where all nations can be sovereign, prosperous and secure,” he said.
“America does more than speak for the values expressed in the United Nations charter,” he said. “Our citizens have paid the ultimate price to defend our freedom and the freedom of many nations represented in this great hall.”