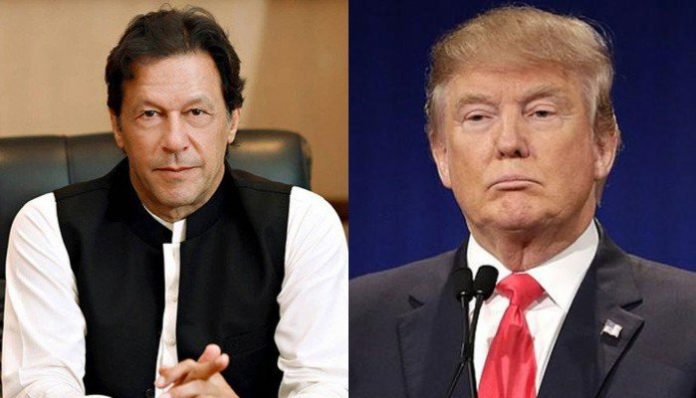 ISLAMABAD: US President Donald Trump on Monday wrote a letter to Prime Minister Imran Khan and urged Pakistan to play its role in the Afghan peace process.
PM Imran chaired a meeting with TV anchors and reporters in Islamabad informed the attendees that a letter was received from the US president earlier in the day.
In a letter, Trump sought assistance from Pakistan in resolving Afghan issue, aimed at ending the 17-year invasion of Afghanistan by the US troops. Trump has asked: “Pakistan to play its role in Afghan peace talks which are aimed at catalysing an end to the 17-year invasion of Afghanistan by US troops”. The PM received the letter from the US president this morning.
PM Imran further revealed that Trump has asked for Pakistan’s help in “bringing the Taliban leadership to the negotiating table”.
Meanwhile, during his interaction with TV anchors later in the day, PM Khan said Pakistan would play its due role to resolve the Afghanistan situation.
On November 19, US president launched an outburst against Pakistan alleging that America paid Pakistan billions of dollars and they never told them that Osama was living there.
“Of course we should have captured Osama Bin Laden long before we did. I pointed him out in my book just BEFORE the attack on the World Trade Center. President Clinton famously missed his shot. We paid Pakistan Billions of Dollars & they never told us he was living there. Fools!
“…We no longer pay Pakistan the $Billions because they would take our money and do nothing for us, Bin Laden being a prime example, Afghanistan being another. They were just one of many countries that take from the United States without giving anything in return. That’s ENDING!” he wrote on his Twitter account.
Prime Minister Imran Khan hit back at President Donald Trump’s statement against Pakistan by saying that instead of making Pakistan a scapegoat for US failures, the Trump administration should do a serious assessment of why the Taliban are stronger in Afghanistan than before.
Pakistan has suffered enough in the US war on terror and now it would do what was best for its people, said Mr. Khan in his Twitter response to Trump.
The PM said: “Instead of making Pakistan a scapegoat for their failures, the US should do a serious assessment of why, despite 140000 NATO troops plus 250,000 Afghan troops & reportedly $1 trillion spent on war in Afghanistan, the Taliban today are stronger than before.”