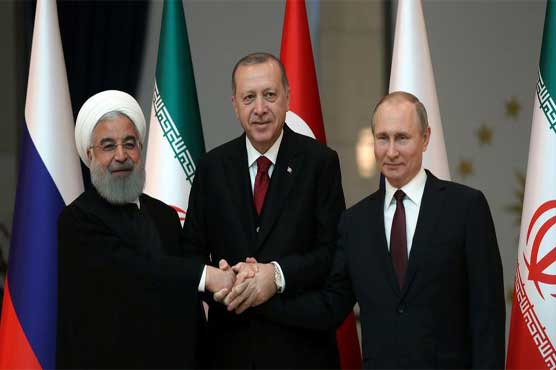 ANKARA: The presidents of Iran, Turkey and Russia vowed to work for a lasting ceasefire after over seven years of civil war in Syria, following a summit aimed at boosting both peace prospects and also their influence in the country.
Turkish President Recep Tayyip Erdogan, Iran s Hassan Rouhani and Russia s Vladimir Putin reaffirmed their commitment to cooperating for “the achievement of a lasting ceasefire between the conflicting parties”, a joint communique said.
The meeting in Ankara was the second such tripartite summit after the first hosted by Putin in November in the Black Sea city of Sochi, in a new symbol of an increasingly deep cooperation.
However there was no major breakthrough announced after the summit meeting, and comments by the trio indicated possible tensions in what analysts see as a potentially brittle alliance.
The three powers have backed peace talks in the Kazakh capital Astana, which they argue are a parallel process to UN-supported discussions in Geneva.
Erdogan insisted their meetings and the Astana talks were not an “alternative” to the Geneva process to find peace in Syria, at a post-summit press conference.
But the three presidents said that so far, “the Astana format had been the only effective international initiative that had helped reduce violence across Syria and had contributed to peace and stability”.
Experts say that Ankara, Moscow and Tehran are looking to take advantage of the waning Western influence in Syria and reluctance to commit militarily.
Hours before the summit, US President Donald Trump said he wanted to “bring our troops back home” from Syria after indicating last week the US would withdraw from the country “very soon”.
But Rouhani hit back, complaining that the “Americans say something different every day.”
Unlike the West, the three countries have deployed significant military resources in Syria, with Tehran having a strong ground presence and Moscow ruling the skies.
Turkey meanwhile drove out Kurdish militia from Afrin city on March 18, two months after it launched an offensive in northern Syria supporting Syrian rebels.
Ankara has indicated Turkey could extend its operation to the Kurdish-held town of Manbij and further east, as well as the northern Syrian town of Tal Rifaat.
“We are ready to work together with our Iranian and Russian friends to make Tal Rifaat region liveable for our Syrian brothers and sisters,” Erdogan said.
So far the three powers — whose imperial predecessor states spent much of the last centuries at war — have managed to keep a lid on their differences on Syria.
While Moscow and Tehran support the regime of Syrian President Bashar al-Assad politically and militarily, Turkey has repeatedly called for his removal and supported Syrian opposition fighters.
But experts say disputes between Moscow and Ankara could come to the fore when the regime turns its attention to Idlib province.
Idlib s civilian infrastructure is largely controlled by the jihadist alliance Hayat Tahrir al-Sham (HTS), led by Syria s former Al-Qaeda affiliate.
Turkey is keen to prevent a Russia-backed regime assault on the province home to around 2.5 million people. But Moscow wants Ankara to also exert influence over the jihadists in control of Idlib.
Tensions may also be emerging behind the scene between Russia and Iran, with Moscow much more concerned to press for reform under Assad than Tehran.
Meanwhile, according to the Iranian presidency, Rouhani said in the closed-door session that the Afrin area taken by Turkey and its allied forces should be handed over to the Syrian regime s army.
He argued that the Syrian army “is still the symbol of this country s national sovereignty”. Turkey s reaction was not made public.
Erdogan also expressed alarm over the situation in Eastern Ghouta near Damascus, which has come under heavy regime bombardment over the last weeks, creating a major humanitarian crisis.
Syrian state news agency SANA said evacuations from the former rebel bastion s main town of Douma of Jaish al-Islam fighters and family members were ongoing for a third day.
Erdogan said that the bloodshed in Ghouta had been “ruthless” but avoided any direct criticism of Russia and Putin as the backers of the Syrian regime.
More than 350,000 people have been killed since the war began following anti-government protests in 2011, while millions have been internally displaced or forced to flee. …Agencies 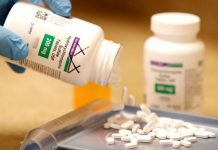 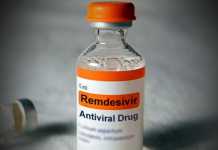