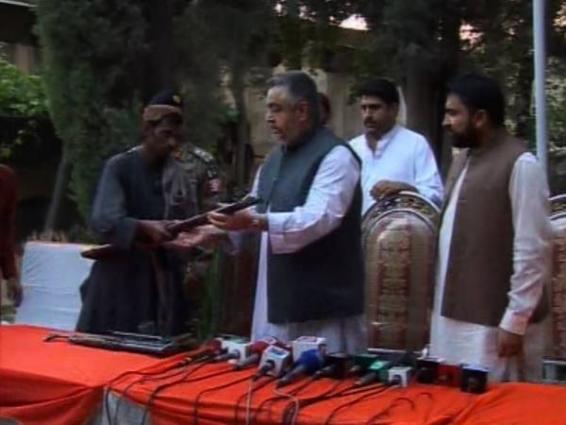 QUETTA: Two key commanders of a banned Baloch militant outfit laid down their arms on Saturday during a ceremony in Quetta.
The two Ferrari commanders had been operating from Afghanistan for the past eight years.
A ceremony was held by the Balochistan home ministry to appreciate the insurgents for their unconditional surrender.
The two Baloch commanders were identified as Muhammad Din and his younger brother.
“Insurgents are gradually coming back into national mainstream,” Balochistan Home Minister Sarfraz Bugti said.
“Our government will take steps to rehabilitate the insurgents so that they could start a normal life,” he said.
Muhammad Din, who surrendered to authorities, said that he was living in a Ferrari camp while his family had been residing in Afghanistan. “Forty seven members of our family have returned from Afghanistan,” he said.
Balochistan minister Nawaz Changez Marri said that he had persuaded the insurgents to lay down arms. “They have pledged to live a peaceful life from now on,” he said.
“God willing, remaining Ferrari members will also join the national mainstream,” he hoped.