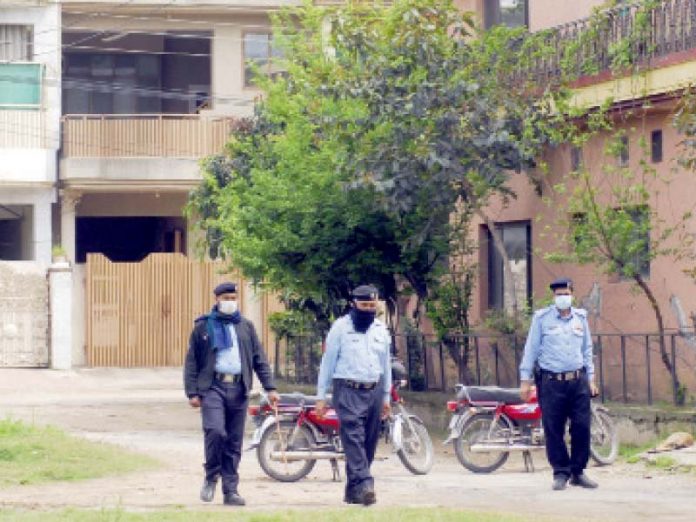 ISLAMABAD: The district administration of Islamabad on Thursday sealed two residential areas of Sector I-10 after cases of Covid-19 were confirmed among residents there.
According to a notification, the district magistrate ordered that Sectors I-10/1 and I-10/4 are to be sealed, and also requested deployment of Islamabad Police and Rangers to cordon off the said areas to ensure public safety.
On April 28, with 36 new cases reported, the capital saw the single biggest increase in its Covid-19 tally since the outbreak began. Another 16 cases were reported a day after (Apr 29), bringing Islamabad’s total number of cases to 313.
Teams involved in surveillance to prevent the spread of the coronavirus in Islamabad have noticed social distancing is not being practised in shops that have opened with the capital administration’s permission.
Large crowds were seen in markets and shopping centres, which is alarming, they said.
According to these officials, Bhara Kahu, Tarlai and I-10 are the capital’s Covid-19 hotspots.
The government has been warning people about the virus spreading faster during Ramazan. The latest warning came from Special Assistant to the Prime Minister on Health Dr Zafar Mirza on Saturday.
“Traditionally rush is observed at shops at the time of iftar. The situation on Saturday evening was not different than that of past years.
“People need to understand that if we don’t follow the precautionary measures, the situation may become worse. Pakistan is passing through a crucial, critical time when the disease can spread rapidly. I request the masses that they should change their routine of iftar, sehar and visiting mosques,” he warned while speaking at a news conference.
However, in spite of these warnings, the federal government has allowed continuation of congregational prayers in Ramazan.
Last month, the union council of Kot Hathial was put under quarantine after six members of the Tableeghi Jamaat residing in the area tested positive for coronavirus.