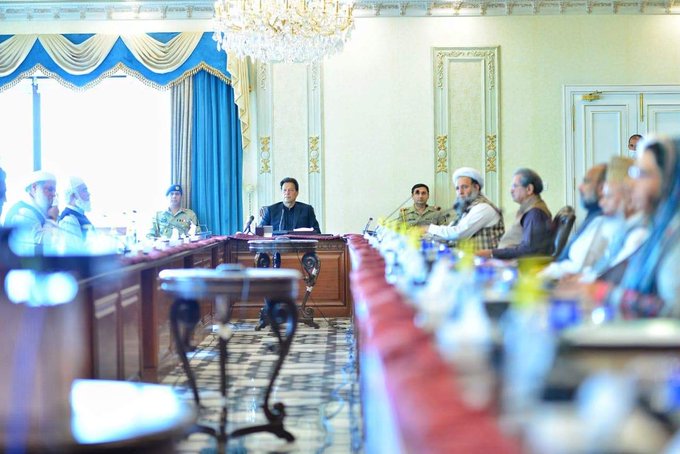 ISLAMABAD: Religious scholars have strongly supported the lockdown strategy of the government in a meeting with Prime Minister Imran Khan, a statement from PM Office said on Monday.
A delegation of clerics called on PM Imran in Islamabad today and assured him of their full support in implementing precautionary measures taken by the government to contain the spread of coronavirus in the country.
They said that the stance of the prime minister over the lockdown is a realistic approach and in accordance with ground realities.
Briefing the media after the meeting, Special Assistant to the Prime Minister (SAPM) on Information Firdous Ashiq Awan said that it was decided that ‘Youm-e-Tauba’ would be observed on the coming Friday to seek the Almighty’s blessings in this difficult time.
Minister for Religious Affairs Dr Noorul Haq Qadri said that the clerics requested the prime minister to provide relief to mosques and seminaries, to which the premier said he would discuss this with his financial team.
PM Imran also directed the education ministry to plan teleschools for the students of seminaries as well.
The authorities swung into action last week after prominent religious leaders announced that the lockdown will no more apply on mosques. They had said that taraweeh and congregational prayers would continue as usual during the holy month of Ramazan.
The delegation included Pir Aminul Hasanat Shah, Pir Shams-ul-Amin, Pir Naqib-ur-Rehman, Maulana Mohammad Hanif Jalandhari, Maulana Tahir Mahmood Ashrafi, Maulana Hamidul Haq Haqqani, Hafiz Ghulam Mohammad Sialvi, Allama Raja Nasir Abbas, Sahibzada Pir Sultan Fayyaz Hussain, Mufti Maulana Syed Charagh Din Shah and Maulana Ziaullah Shah.
Governor Sindh Imran Ismail, Mufti Munib-ur-Rehman, Mufti Taqi Usmani and Allama Shehenshah Hussain Naqvi also attended the meeting through video link.
Minister for Federal Education Shafqat Mahmood, Minister for Religious Affairs Noor ul Haq Qadri, Assistant Special Information Minister Dr Firdous Ashiq Awan, Chairman Council of Islamic Ideology Dr Qibla Ayaz and others were also present
Earlier on Saturday, President Arif Alvi, while announcing that mosques will remain open for taraweeh prayers in Ramazan, urged citizens and religious leaders alike to exercise discipline and take precautions against the coronavirus pandemic when coming to mosques.
While presiding over a meeting with ulema in the federal capital, the president also appealed to the masses to donate generously during the coming month of Ramazan since many madressahs, mosques and welfare organisations looked forward to these funds for covering their routine expenses.
“As per the foundations of Islamic society, we as a nation should exhibit discipline, coherence and national uniformity as we continue our battle against the coronavirus,” the president asserted, adding that we [as a nation] can curb the spread of the virus in the holy month of Ramazan by staying away from crowds and unnecessary gatherings.