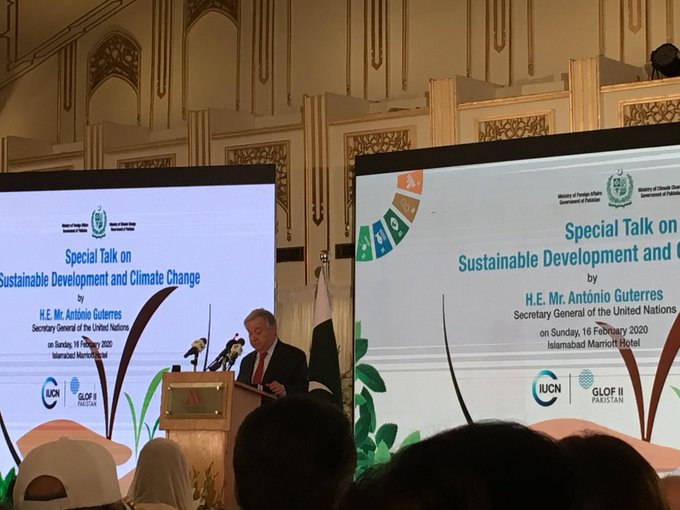 ISLAMABAD: UN Secretary General Antonio Guterres praised Pakistan’s efforts to achieve the Sustainable Development Goals but said we are in the battle for our lives.
But this is a battle that can be won, he said during a climate change conference in Islamabad.
The SDPs are interlinked to end poverty and build kinds of societies that we’ll be proud to pass down to future generations, he said. They cover a spectrum of human progress–poverty, inequality, hunger, health, quality of education, decent work, a just economy, gender equality and environment.
Every nation and community must work towards the SDPs, he said. No country can say it doesn’t have inequality, face climate change effects or poverty, Guterres said.

Also read: UN chief meets refugees in Islamabad, hails Pakistan’s hospitality
“Today’s challenges to sustainable development and human progress do not respect borders. They are not confined to individual nations,” he said.
He said there is a demand for collaborative ventures and a need to cooperate across borders.
Pakistan embraced the SDPs from the start, he said. In 2016, Pakistan was one of the first nations to integrate SDPs into its national agenda and recognised it as its national goals, said Guterres. Poverty reduction is at the heart of Pakistan’s efforts, he said.
He praised Pakistan’s Ehsaas and Kamyab Jawan programmes. Stunting is down, malnutrition is down, neonatal mortality has been brought down thanks to the work of Lady Health Workers and we are encouraged by the government’s commitment to universal health coverage, he said.
“But globally and in Pakistan, the pace of change is not yet fast enough.” He counted Pakistan’s major challenges as polio, HIV, environmental degradation,providing education, skills and jobs for all in one of the youngest countries in the world. And the rest of the world is facing similar problems.
He said globally, we are off track. There is gender inequality in many fields, denying women and girls opportunities across the world, he said, adding that migrants and people with disabilities are also at threat of being left behind.
Our collective efforts are not enough to achieve the SDPs by 2030, he said, adding that according to some estimates, we may be only half-way there by the deadline.
“That is why we have called this the ‘Decade of Action’,” he said, calling for the urgent need to step up action.
Every nation, every community and every person must make a change, he said. We must create an unstoppable momentum for the goals, identify what works, and scale up solutions and investments to reach all people on the planet.
He said they need an approximate $3 trillion in financing but official development assistance is decreasing.
Developed nations must deliver on the Paris Agreement, he said, and help developing member states improve. He also said internationally, there must be a clampdown on tax evasion, money laundering and illicit funding.
“I firmly believe we can be the generation that ends poverty and hunger and conquers injustice and inequality but it is not going to be easy,” said the UN chief. We are facing multiple obstacles, such as higher geopolitical tensions and growing mistrust.
But our climate emergency is our most grave and urgent threat, he said. “We can tackle it if we can generate political will and unity we need to make a difference,” he said.
Climate disruption presents a clear and present danger worldwide, he added, noting that while Pakistan contributed little to the problem, it faces disproportionate vulnerabilities.
He said 10,000 people have been killed in Pakistan in climate-related disasters, such as the 2015 Karachi heatwave that claimed 1,200 lives.
He also pointed out the locust emergency triggered by climate change. “Global warming is leading to global warming.”
But the biggest problem in Pakistan, he said, is water. He said Pakistan is one of the most water-stressed countries in the world and this puts its poverty alleviation and food security projects at risk.
The same problems are being faced across the world, he said, adding that no country is immune. Guterres called on leaders to act, saying momentum had stalled after the Paris Agreement.
“The planet is burning but too many decision makers continue to sizzle,” he said. At the next conference in Glasgow, governments must deliver the changes the people need and demand.
He welcomed Pakistan’s 10 Billion Tree Tsunami and Clean Green Movement. I was impressed when I heard that Islamabad has abolished plastic bags and that the move is going to be implemented everywhere, he said, adding that plastic pollution is one of the central concerns at the UN.
“We need global solidarity backed by global action,” he said. This is the battle for our lives but it can be won. “Let’s look ahead to 2030 with optimism. We have overcome challenges before and can do so again,” he said.
During the question and answer session, Guterres was asked to comment on Kashmir and said he supports dialogue between Pakistan and India. He said the UN has offered to mediate, but mediation can only come in when both parties agree.