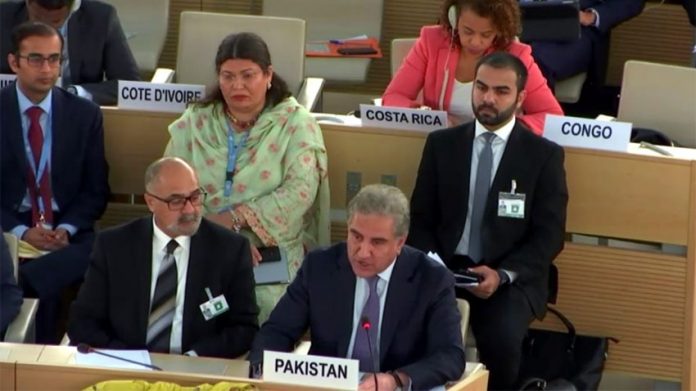 GENEVA: Foreign Minister Shah Mahmood Qureshi has said the UN Human Rights Council should urge India to immediately lift the curfew and reverse the clampdown and communications blackout in occupied Kashmir.
Addressing the 42nd session of the human rights council in Geneva on Tuesday, he said India should also be asked to stop the use of pellet guns, end the bloodshed and restore fundamental freedoms and liberties.
He said India should release political prisoners, stop targeting human rights defenders and fulfill obligations under the UN Security Council resolutions and various human rights instruments. He said Indian draconian emergency laws in occupied Kashmir cannot be allowed to stand.
The Foreign Minister urged the human rights council to take steps to bring to justice the perpetrators of human rights violations of the innocent Kashmir people and in this context constitute a commission of inquiry as recommended by the office of the UN High Commissioner for Human Rights.
The Foreign Minister said if India has nothing to hide, it should allow unhindered access to the Commission of Inquiry. He said Pakistan stands ready to allow access to the proposed Commission of Inquiry, or other mechanisms, on our side of the Line of Control; together with similar access to Indian Occupied Jammu & Kashmir.
The foreign minister urged focused discussions on the two Reports of United Nations High Commissioner for Human Rights, in the Human Rights Council, and a unanimous decision by this House to implement their recommendations made to India, Pakistan and foremost to the Human Rights Council.
Shah Mahmood Qureshi said the human rights council should authorize the Office of the High Commissioner, and the Human Rights Council’s Special Procedures Mandate Holders, to monitor and report on India’s human rights violations in IOK; and regularly update this Council.
The Foreign Minister said India should be called upon to allow unhindered access to Human Rights Organizations and international media, to the occupied valley.
Voicing serious concerns over the situation in occupied Kashmir, the Foreign Minister said we must not remain indifferent to the tragedy that is unfolding before our eyes. We must act decisively and with conviction.
The Foreign Minister said the people of Jammu and Kashmir have been awaiting for their right to self-determination for seven decades.
Drawing attention towards the prevailing situation in occupied Kashmir, the Foreign Minister said the basic and inalienable human rights of Kashmiri people are being trampled with impunity by India. The people of this occupied land are suffering systematic, and serial, violations of their fundamental freedoms.
He said India has transformed Occupied Jammu & Kashmir into the largest prison on this planet, with virtually no access to basic amenities and means of communication over the last six weeks. He said shops are running short of supplies, hospitals of life-saving medicines, and the sick and wounded – many of them due to the direct and indiscriminate use of force by the Indian occupation forces – are unable to access even emergency health services.
He said over 6,000 people, political workers, activists, students, and professionals have been arrested, without due process of law. Many of them have been forcibly shipped to jails all over India, under draconian laws operative in Indian Occupied Jammu & Kashmir.
He said independent and renowned international media outlets, as well as neutral observers, are regularly reporting horrendous atrocities against the people of Indian Occupied Jammu & Kashmir.
He said the Kashmiri people in the occupied territory as a national, ethnic, racial and religious group of people face grave threats to their lives, way of living and livelihoods from a murderous, misogynistic, and xenophobic regime.
The Foreign Minister said this is the true face of the so-called largest democracy of the world.
Shah Mahmood Qureshi said India’s unilateral actions of 5th August 2019 of altering the status of occupied Kashmir recognized as a disputed territory by the UN Security Council, are illegal under international law. With these illegal changes, India’s presence is, by its own yardstick, naked foreign occupation.
He said India’s assertion that these actions are its “internal affair” is patently false. He said Jammu and Kashmir has been on the agenda of the United Nations for over 70 years now. The meeting of the Security Council on 16th August, to discuss the Jammu and Kashmir dispute, is an attestation of this fact.
The Foreign Minister said India’s efforts to hide its atrocities by falsely labeling freedom movement in occupied Kashmir terrorism and cross border terrorism are shameless and indefensible.
Shah Mahmood Qureshi warned India can once again resort to false-flag operations, and use the bogey of terrorism as a red herring, to divert international opinion.
Referring to increased LOC violations, the Foreign Minister said New Delhi has used cluster ammunition and heavy artillery, in flagrant disregard of fundamental norms of international humanitarian law. This, he said, must end immediately. He said the reckless posture and draconian measures by India pose a grave threat to peace and security in nuclearized South Asia.