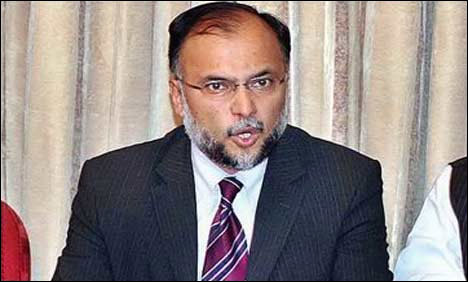 ISLAMABAD: Interior Minister Ahsan Iqbal says the US Administration has hinted that economic aid to Pakistan will not be stopped.
In an interview with BBC, he said that different lobbies are working in US and want to introduce bills in US Congress of their own choice.
He said US is using different war tactics in Afghanistan according to its new policy. He said the geography of Pakistan and Afghanistan is the same and Pakistan is the only important and supportive country for the United States in the region.
Regarding safe havens, the Minister quoted US as saying that forty five percent of Afghan territory is under control of extremists and there is no reason for them to have sanctuaries in Pakistan.
To another question about killing of Chinese citizens, he said Pakistan has established a strong force of ten thousand personnel for their protection but neighbouring India which has undue apprehensions may be behind the killing.
He said Indian spy Kulbhushan Yadev who is under arrest on charges of espionage has also admitted that there is an Indian spy network to sabotage the CPEC.