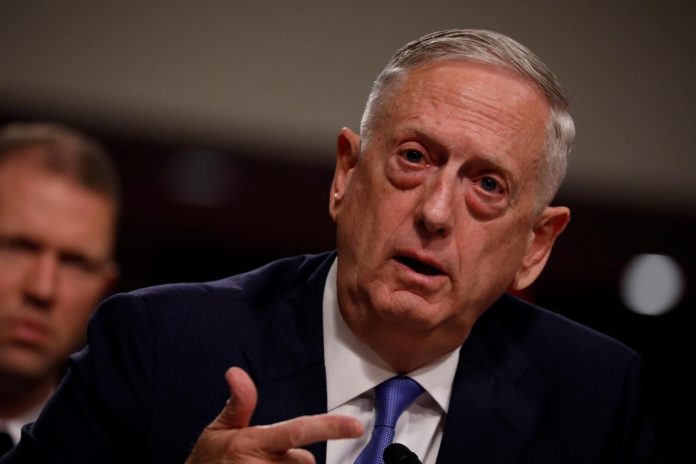 WASHINGTON: US Secretary of Defense James Mattis will visit Pakistan on December 4, according to the Pentagon.
Mattis embarked on a five-day trip to Egypt, Jordan, Pakistan, and Kuwait on Friday, the Pentagon said.
The US Secretary of Defense James Mattis will land in Pakistan on December 4 (Monday) to meet with Prime Minister Shahid Khaqan Abbasi and Chief of Army Staff (COAS) Gen Qamar Bajwa for the discussion on regional security, peace, Afghan conflict and other bilateral issues.
Mattis is scheduled to meet with leaders in each nation “to re-affirm the enduring US commitment to partnerships in the Middle East, West Africa, and South Asia”, Pentagon said in a statement.
He is scheduled to meet with Egyptian President Abdel-Fattah el-Sissi and Defense Minister Gen Sedki Sobhi today (Saturday).
Mattis will then go to Jordan on Sunday, where King Abdullah II will host a conference on combating extremism in West Africa. Attendees of the meeting in Jordan will include representatives from many countries in Africa and Europe.
His final stop will be in Kuwait Tuesday, where he will meet with Kuwaiti Emir Sheikh Sabah Al Ahmad Al Sabah.
On November 24, Foreign Minister Khawaja Asif had confirmed that US Defence Secretary James Mattis would conduct a one-day visit to the country.
Mattis had earlier visited India in September and the Pentagon said the United States views India as a valued and influential partner, with broad mutual interests extending well beyond South Asia.
In 2016, the United States designated India a “Major Defence Partner” and Trump has sought to further boost military ties, praising India for contributing to regional peace and stability and purchasing US military equipment.– Reuters