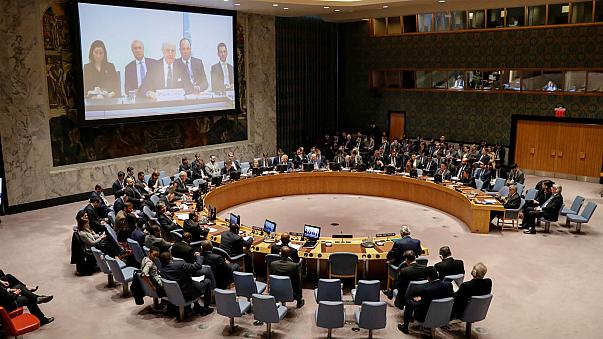 NEW YORK: The United States and Russia have traded barbs at a United Nations Security Council meeting over the alleged chemical weapons attack in war-torn Syria’s Eastern Ghouta region.
At least 70 people, including children, died in the rebel-held town of Douma as a result of the alleged chemical attack on Saturday, according to media reports citing aid groups working on the ground.
Russia’s UN Ambassador Vassily Nebenzia told the the 15-member Council on Monday that the incident in Douma was staged and that any US military action in response could have “grave repercussions”.
“Through the relevant channels we already conveyed to the US that armed force under mendacious pretext against Syria where, at the request of the legitimate government of a country, Russian troops have been deployed, could lead to grave repercussions,” he said.
But US Ambassador to the UN Nikki Haley declared that the US “will respond” to the alleged attack regardless of whether the UN Security Council acts or not.
“We have reached the moment when the world must see justice done,” Haley told the Council.
“History will record this as the moment when the Security Council either discharged its duty or demonstrated its utter and complete failure to protect the people of Syria,” she said. “Either way, the United States will respond.”
The comments came after US President Donald Trump promised quick action in response to the “barbaric” alleged chemical weapons attack.
Speaking at a Cabinet meeting, Trump said he was in talks with military and other advisers and a decision would be made within 48 hours.
“Nothing is off the table,” he said when asked if military action was a possibility.
Calling Syrian President al-Assad a “monster”, Ms Haley said that if the UN Security Council acts or not, “either way, the United States will respond”.
“Meetings are ongoing, important decisions are being weighed even as we speak,” she said.
Meanwhile, diplomats at the UN said the Security Council could vote as early as Tuesday on rival US and Russian proposals to investigate chemical weapons attacks in Syria. But they expect the move could trigger vetoes on both measures.
The diplomats said US ambassador Haley told a closed-door Council meeting that the United States wanted a vote on the measure, even though Russia said it contained “some unacceptable elements”.
Russia put forward its own proposal in January that has been rejected by Western powers who say it would give the Syrian government an upper hand over investigations on its territory.
“The United States is pushing for a vote tomorrow,” said a Security Council diplomat. “The US position was that they were negotiating in good faith, but the world is watching for the council to act.”
There was no formal request for a vote, however, by the evening on Monday.
Russia and Syria have fiercely denied that chemical weapons were used in Syria.
A draft resolution requires nine votes to be adopted and no vetoes from the five permanent members– Britain, China, France, Russia and the United States.
The United States is proposing to establish the new panel for one year to work with the Organisation for the Prohibition of Chemical Weapons to identify perpetrators of chemical attacks. …APP