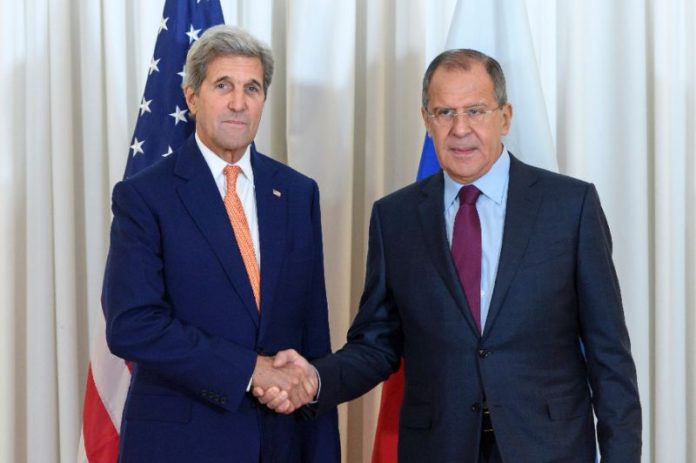 BEIRUT: U.S. Secretary of State John Kerry will meet his Russian counterpart in Switzerland on Saturday to discuss Syria, officials said on Wednesday, as a devastating bombing campaign of the city of Aleppo intensified.
The Syrian government launched an assault to capture rebel-held areas of Aleppo last month with Russian air support and Iranian-backed militias, a week into a ceasefire agreed by Washington and Moscow.
Kerry broke off talks with Russian Foreign Minister Sergei Lavrov last week over the offensive, which has included air strikes on hospitals that the United States and France said amounted to war crimes for which Syria and Russia were responsible.
The Syrian and Russian governments blamed their foes for breaking the ceasefire and said they target only militants in the city, the last major urban stronghold of the Western-backed rebels, where more than 250,000 people are trapped under siege.
The resumption of talks, despite the offensive, was a sign of the lack of options facing Western nations over the Syria conflict, where they worry scaled-up arms supplies for the rebels could end up in the hands of jihadist groups.
Russia’s Foreign Ministry said Kerry and Lavrov would meet in the Swiss city of Lausanne to consider steps toward settling the conflict. The meeting will include foreign ministers from Turkey, Qatar, Saudi Arabia and Iran. A senior State Department official confirmed Kerry would attend.
White House spokesman Josh Earnest said Washington remained committed to a “deep multilateral engagement” to reduce the violence in Syria which would “necessarily” involve Russia too.
“But it is no longer in the context of trying to broker this agreement that would … hold out the prospect of U.S. military cooperation with Russia. That’s something that Russia has lost… the credibility to be able to try to agree to,” he said.
On Wednesday, 25 people were killed by heavy air strikes on rebel-held areas of Aleppo, the Civil Defence, a rescue service working in rebel-held areas, said on Twitter, adding that 15 of them were killed at a market place in the Fardous district.
The Syrian army has denied targeting civilians.
A Syrian military source said warplanes had struck several locations to the south and southwest of Aleppo but Syrian and Russian officials could not immediately be reached to comment on the market place attack.
It was the second day of heavy air strikes after a lull of several days which the Syrian army said was designed to allow civilians to leave.
Rebels said the intensity of the air strikes on Tuesday and Wednesday had returned to the level seen at the start of the Russian-backed campaign to capture Aleppo.
Moscow’s intervention, which began just over a year ago, has tipped the scales back toward President Bashar al-Assad.
The Syrian Observatory for Human Rights, a Britain-based organization that reports on the war, said it had documented the deaths of 55 people killed in escalating bombardment of eastern Aleppo in the last 48 hours.
The Observatory also reported that four people were killed in government-held areas by insurgent shelling.
Clashes between pro-government and rebel forces were also reported in a rebel-held area in southern Aleppo.
The war has killed more than 300,000 people, created the world’s worst refugee crisis, allowed for the rise of Islamic State and drawn in regional and major powers.
Assad aims to take back all of Aleppo, which was Syria’s biggest city before the outbreak of war in 2011.
The city has been divided between government and rebel control for years and food, water and medical supplies in rebel areas are now running low.
Last Saturday Russia vetoed a French-drafted United Nations Security Council resolution that would have demanded an immediate end to air strikes and military flights over Aleppo.
On Wednesday, Russian President Vladimir Putin accused France of deliberately luring Moscow into vetoing the resolution and suggested it was doing the bidding of the United States.
“What for? To exacerbate the situation and to whip up anti-Russian hysteria in media under their control, and to deceive their own citizens,” Putin said, accusing France of serving U.S. domestic political interests.
Putin later told France’s TF1 television channel that the West, especially the United States, was responsible for Syria’s plight and he dismissed the Western accusations of Russian and Syrian war crimes as “political rhetoric”.
French Prime Minister Manuel Valls faced criticism from opposition lawmakers over his government’s handling of relations with Russia over Syria.
“Russia has chosen an obstructive attitude and from our point of view this stance is unjustifiable,” Valls said after being asked by a parliamentarian why Paris was adopting a tough position on Russia.
Despite the war of words, the Kremlin said Putin spoke to French President Francois Hollande and German Chancellor Angela Merkel on Wednesday and said he hoped Saturday’s talks would be “fruitful”.
France and Britain back a proposal for a dilution of big powers’ United Nations vetoes in cases of serious war crimes, the top U.N. human rights official said in Geneva, but he gave little support to Syrian opposition hopes of strong-arming Russia over eastern Aleppo.
Zeid Ra’ad al Hussein, U.N. High Commissioner for Human Rights, said last week that Security Council veto powers should be curbed to help resolve the situation and bring Syria under the jurisdiction of the International Criminal Court.
The dispute over Aleppo has unfolded against a backdrop of separate campaigns being waged against Islamic State by a U.S.-led alliance and the Russian-backed Syrian army.
As part of the fight against IS, Syrian rebels backed by Turkey are currently waging a campaign in northern Syria near the Turkish border.
A rebel commander told Reuters the Turkey-backed forces had advanced closer to an Islamic State-held village that is of great symbolic significance to the group on Wednesday.
The rebels captured the village of Duweibiq, which is some 2 km from Dabiq – the site of an apocalyptic prophecy central to the militant group’s ideology. “The clashes were not very fierce but there is resistance,” the commander said. …Agencies