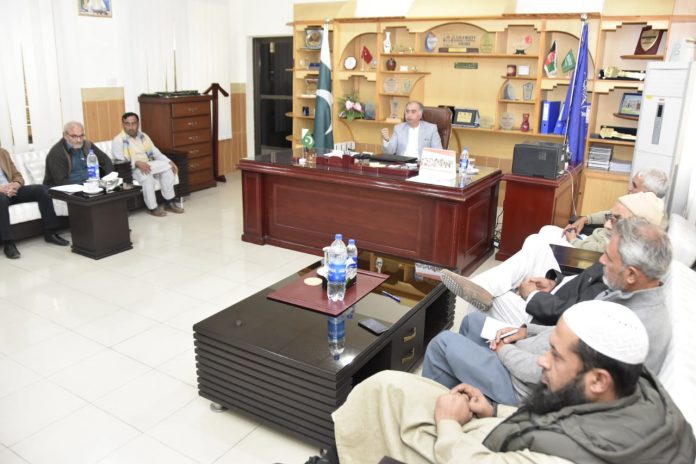 SWABI: Vice-chancellor University of Swabi Professor Dr Imtiaz Ali Khan has pledged to bring the university on a par with international educational institutions as the process towards academic and research excellence has been expedited during the administration under him.
Talking to journalists at the university on Thursday, the vice-chancellor said that efforts have already been made to improve the academic, research and administrative performance of the university. He said that he took charge of the university in June 2017. At the time of his arrival in the university there were only 11 academic departments where some 1100 students were enrolled.
The administration under him established 19 new departments increasing the number to 30. The enrollment of students also multiplied during the period and currently a total of 5000 students are enrolled in the university, he said.
Also, before him none of the departments were offering MPhil and PhD programmes. But now nine departments are running MPhil and PhD programmes and 12 departments are imparting master’s courses, he said. The first PhD scholar of the university would defend his thesis today (Friday), he said.
“I don’t want to take credit for the development made in the university. I consider it my duty. What I have done was my duty, which I tried my best to perform in an effective manner,” he remarked.
He said that the number of PhD teachers has also shown substantial increase. Before, his joining the university, there were a total of 44 PhDs in the university. The number has now reached to 75, which is almost double of the earlier figure, he said.
Dr Imtiaz Ali Khan has recently been given the additional charge of Women University Swabi as well and he has introduced a number of reforms in the women university within the short span of time. He said that the transport system for the girl students has been improved. Study tours were arranged for the students. Fees and other charges were lessened to reduce burden on the parents, he said.
The two universities have also decided to arrange joint convocation, which would be the first in the history of the country. It would not only reduce the financial cost but also enable the graduates of the two universities to receive degrees at the hands of the top government functionaries, he said.
The joint convocation of the University of Swabi and Women University, Swabi would be held on December 9 (Monday) where some 700 graduates would be awarded degrees. Chief Minister Khyber Pakhtunkhwa Mehmood Khan would be the chief guest on the occasion, while Speaker National Assembly Asad Qaiser would serve as guest of honour. The graduates with distinctions would also be awarded medal and prizes on the occasion.
To a question about need based scholarship, the vice-chancellor said that some 850 students have been given the scholarship and an amount of Rs 45 millions had been given for the purpose. Similarly, at the Women University, more than 200 students have been given need based scholarships.