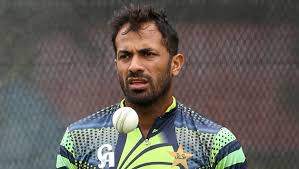 LAHORE: After the disappointing bowling effort by the Pakistan team in the ODI series against England, there have been reports that left-arm seamer Wahab Riaz is being considered for the World Cup Squad.
There were already reports of Faheem Ashraf and Abid Ali being dropped for the squad, but now Junaid Khan’s inclusion is also doubtful.
While Coach Mickey Arthur is in favour of retaining Faheem Ashraf in the squad, skipper Sarfaraz Ahmed has thrown his weight behind Wahab Riaz who is also supported by chief selector Inzam-ul-Haq.
At the time of the initial 15-member World Cup squad’s announcement, Inzamam-ul-Haq had said that Wahab wasn’t including as he was not part of the team’s plan. Wahab Riaz who has taken 102 ODI wickets for Pakistan in 79 matches last represented the country in the 2017 ICC Champions Trophy.
Arthur had agreed to include Mohammad Amir in the squad in favour of Faheem Ashraf now wants Ashraf to replace Junaid Khan.
The final squads for the World Cup will be announced by May 23. Pakistan will play their first match against West Indies on May 31.