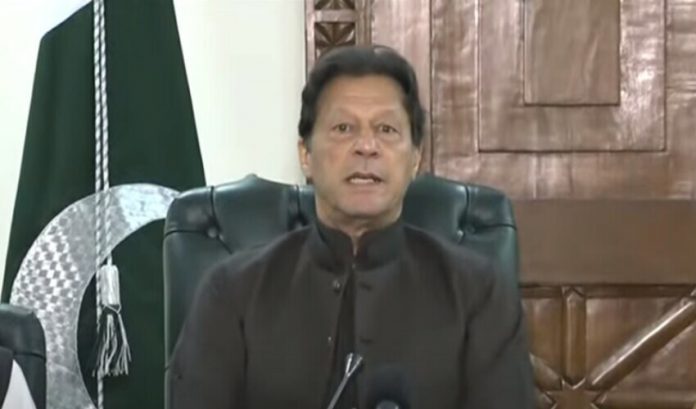 Addressing a press conference after PTI’s core committee meeting, PTI chief said that the recent changes in the NAB laws have abolished the concept of corruption while questioning the institutions to notice where the country was being pushed steered and what message was being propagated to the youth.

Imran Khan said they would ask the top court if staging a peaceful protest is allowed in Pakistan, adding that PTI has never resorted to politics of anarchy.

He announced going to the SC for cases on Lahore CCPO, DIG Operations, and Islamabad IG for what they have done with the people. He added that photos of the police personnel would also be circulated on social media, so people recognize their faces.

PTI chairman said it is the test of the democracy in Pakistan and questioned what would be left in the country if the people could not protest. He said the protesters were manhandled and beaten as if they were terrorists.

He said they have started preparations for the long march after a six-day deadline, adding that they would come prepared to Islamabad this time to counter what the government had done.

He urged the institutions to come forward to save the country as it was not only PTI’s responsibility.

The former prime minister termed PML-N leaders as fascist who would choose violence after coming into power.

He said the police action against its own people would not have happened if Rana Sanaullah and Shehbaz Sharif were punished in the Model Town massacre, adding that such action on the people was not even imaginable in the West.

Explaining why he didn’t stage a sit-in in Islamabad after the long march, Imran Khan said he did so to avoid bloodshed as people were furious. He expressed fear that people could have turned against the army because they were already angry at the Punjab police and Rangers.

He said PTI did not develop a military wing in the party despite everyone having suggested doing so for doing politics in Karachi.

The ex-premier reiterated that they would not accept the government installed through a US-backed conspiracy against an elected prime minister.

He said the imported government has increased the petrol price by Rs30 in six weeks of its tenure.

Lambasting PML-N leadership, PTI chairman said the people on bail are taking decisions for Pakistan and vowed to never accept this government even if it costs him his life.

“I was removed because I wanted an independent foreign policy.”

“We will not accept this ‘imported-government,’ PTI will raise this issue in the Supreme court, high courts as well as the human rights organizations.”

“Only six weeks and petrol prices have been increased by 30 rupees. India has imported oil in 30% less price than Russia.”

The PTI government had reached on an agreement with Russia to purchase fuel on discounted prices, but the new government did not buy fuel from Russia because they fear the US, says Imran.