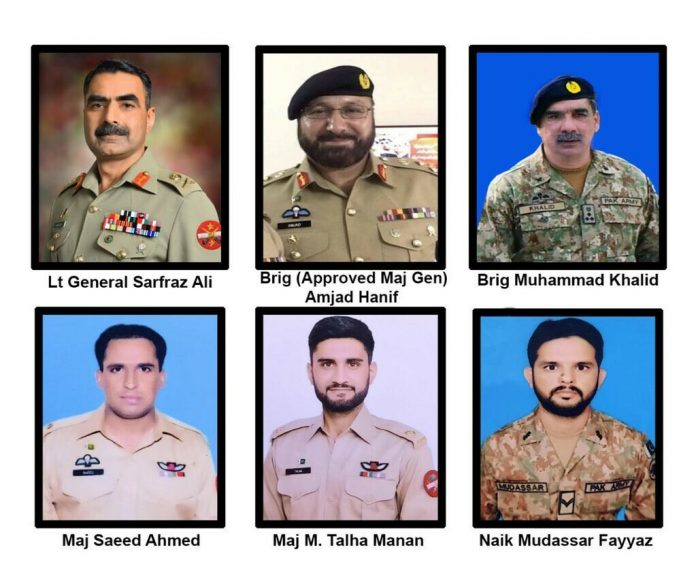 ISLAMABAD: The wreckage of the missing military helicopter that went missing yesterday (Monday) in Balochistan’s Lasbela during relief operations has been found, with no survivors, confirmed Inter-Services Public Relations (ISPR)  on Tuesday.

The other five martyrs include Brigadier Amjad Hanif — whose name had been approved for promotion as major general — Brigadier Muhammad Khalid, both pilots Major Saeed Ahmed and Major Talha Manan, and crew member Naik Mudassar Fayyaz.

The confirmation comes after a night of frenzied search for the missing chopper that lost content with air traffic control on Monday evening.

The ISPR, in its tweet on Monday, had said that the army aviation helicopter with six people on board, that was on flood relief operations in Balochistan, had gone missing.

The Pakistan Army and the civil authorities have been conducting relief and rescue operations in the rain and flood-hit areas of the province.

Following the incident Prime Minister Shahbaz Sharif expressed concern over the disappearance of the helicopter, saying that the disappearance of the army aviation helicopter from Balochistan was alarming. “The entire nation prays to Allah Almighty for the safety, security, and return of these sons of the country who came out to help the flood victims,” the premier said in a tweet.